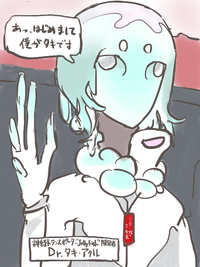 The Enoca (エノカ Enoca) are an alien race that is different from both Talyxian and Eltus in the Vilous universe. They have an amorphous appearance like almost all Talyxians show. A part of them have appearance that is vaguely reminiscent of aquatic creatures, but it's still unclear what common features all Enoca share. They existed somewhere in the Vilous universe all throughout history, even before the Eltus races were first observed. Almost all about them is still deeply mysterious. For now, their existence hasn't been confirmed on the Planet Tal.

:Notice: Almost all canon info surrounding the Enoca is still WIP or undecided. Please wait for new lore to be revealed.

Important note: This article has only modern information. Old history and canon went to the ""History of Vilous Development" article.