From Vilous
(Redirected from Native nevreans)
Jump to: navigation, search 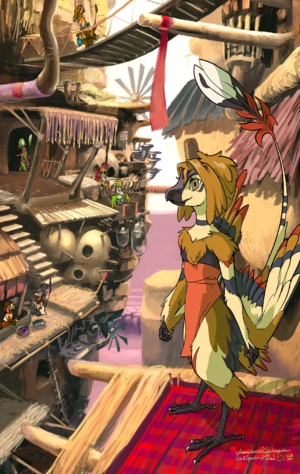 A village of native Nevreans located somewhere in the Nev Mountains, where falls under the range of Nevrea region. This village is between or in a valley, so as to avoid the threatening Talyxian creatures. On the front of the artwork, there is a rather androgynous-looking male Nevrean in a sense of the Nevrean race. On the depth parts of the artwork, we can see a pair of males who are enjoying chatting in an easy-going style, and females are engaging in their daily works or domestic chores. 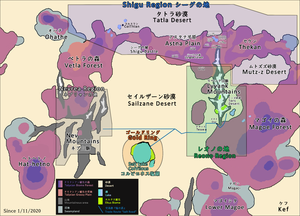 The position of Nevrea region on a Planet Tal's world map.

Nevrea(ネブリャ) is a region located on Western lands of Planet Tal. While most of this area is occupied with Nev Mountains, the region includes some ranges of Talyxian biome forest areas that are composed of the foot of the Nev Mountains and a northern flank where overlaps the Vetla forest.

This region is known as the birthplace of the Nevrean race. And at the same time, this region is completely composed of only Nevreans, ​there is no other Eltus race who lives in this region. ​The area where overlaps Vetla was the only exception of this, but currently, there is nobody lives in the Vetla part for the reason mentioned later.

This region is not urbanized, the culture that can be found there has kept tribal-style traditional lifestyle based on a fixed social format from ancient times.

Because of geographical reasons that the Nev Mountains are very steep and craggy, precipitous mountains, the terrain makes people very difficult even to step in, only Nevreans have been able to settle stably there. In addition to this, most of the Nevreans who live there are very exclusive and conservative, and they are not friendly toward other Eltus races. This region has completely been isolated, it can be said to be that of national seclusion or closed country. The folks have not got any influence from other races and cultures into their own culture, they have maintained the original form of their culture and society in a pure state for a long period of time.

The northern area where overlaps the Vetla forest was the only exception of this, there was a coexistence of Western Sergals and native Nevreans and their cultural exchange. However, after RC 33, this alliance completely disappeared because all Western Sergals were killed by General Rain Silves except for the few survivors who took refuge toward Gold Ring.