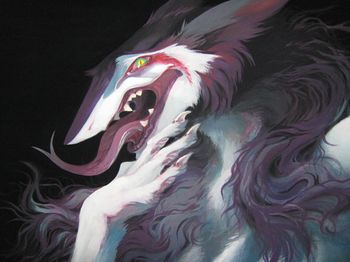 Rain Silves, a.k.a The Great General.

Rain Silves (レイン・シルヴェス) is a female Northern Sergal who has mutational features, and the Supreme Commander of the Shigu army, known across Planet Tal as the "Great General Rain."

She is one of the central characters of the canon story and by far the most famous person from the entire world of Vilous universe. There are the funny nickname "The Fluffy" for her appearance in her declining years.

Many of her physical features don't correspond to common Sergals because she is completely mutant. Her golden eyes, too large build, a monstrously violent nature, and sexually deviant behavior are totally irregular features with comparison to those of normal and regular Sergals.

She is the most widely known Sergal species. Due to this, all Sergals have become known on the internet as existences that are having a characteristic the same as Rain, however, such characteristics are generally confined to Rain, and behavior like Rain is confined to ones under her influence.

She was born to a poor village that is close to the primitive Talyxian biome forest located on the border of Tatla desert, a realm of Shigu regions. When she was a little girl, because of her mutated appearance, the golden eyes, she was subject to discrimination by the villagers and suffered violent training that was almost equal to abuse by her religious mother.

Unable to endure the discrimination and abusive training, she killed her mother and massacred the villagers, then disappeared into the forest with her younger brother. (However, there is another theory about this incident: She did not do harm towards villagers, instead, intense Talyxian monsters forest attacked her village and annihilated the villagers except for Rain and her younger brother as they fled to a forest.)

She carried her younger brother on her back and fled into a forest. However, younger brother died by an illness. At that time, she encountered the Talyxian Wolf, which she calls "Zyn", as a general way to refer to Talyxian Wolves in primitive Shigu culture. Afterward, she had learned how to live in the harsh environment of the Talyxian biome forest while imitating the effective fighting method that Zyn performs.

During her forest life, she got abilities that accompany the "insanity of the forest", and acquired a strong strategy to face the threatening Talyxian creatures.

When she had grown tougher and stronger, she returned to her home village from the forest. She rose as a powerful leader, uniting all the villages within Tatla. Afterward, she had embarked on a journey to aid even poorer Northern people, together with Zyn. She continued her journeys across the Northern lands, aiding the poor and guiding them through her leadership. Due to her great efforts and achievements, the Shigu regions had developed and become a small country with specific ambitions above the simplistic, primitive villages of old.

Soon enough, Rain had become known as "Great General Rain, the Savior", she governed the Shigu which was well on it's way to becoming a Kingdom onto itself. Her fort had been built on the banks of the river, Lon Sodd, which had become her castle. Her Kingdom had begun to develop around and from it as a starting point. She was then continuing to aid poor villages without faltering, bolstered by the security built so far.

Around year 20 of Rain-Calendar, when the whole Northern region had become to be unified under Rain's lead, Zyn suddenly disappeared from Rain's side soon after or before she started down the warlord path. After that, Rain had gradually changed the directional reign, and even her behavior and nature.

Before long, she had become to own the complex feelings that contain both homesickness and revenge and turned those towards a race that is the same as her, Sergals. Her lopsided, distorted attachment, and monstrously violent behavior towards other Sergals, those are considered that were caused by her trauma; the hatred towards her mother and villagers, and the love towards her dead younger brother.

When she became an advanced age, one of her children staged a coup. Then she was taken and was sent to be imprisoned in Gold Ring. She died by the senility in a prison. Her existence was handed down among people posthumously, and the new calendar which assumes her age the first year was established, the "Rain-Calendar".

She is the golden-eyed mutant Northern Sergal that wears blood-like marks as face tattoo down from her eyes to her jaw, with dark blue or dark purple hair across her back and white hair down her front.

She has many irregular features due to her mutation, conspicuous one is the golden-eyes, and her build grow above normal.

Worthy of note, she was the first Sergal to be seen with a forked tongue, having had it was artificially cut by some reason. (It was cut by her mother or even herself, as a ritual that is believed to bring power. The strict lore of the reason is still pending.)

She grew larger throughout her entire life because of her mutation. At age 16 she was the size of some larger sergals, but by 28 she was considerably larger than most sergals. After that, her height did not change so much, but her frame and body continued to grow larger. In her last years, she had become so obese that movement was difficult. Additionally, her fur color became decolorized, turning completely white over time. Then her nickname "The Fluffy" was given for her appearance at that time.

In her early life, she was enthusiastic to improve the poor and harsh situation in those times of Shigu regions, had embarked on a journey to aid even poorer Northern people together with her Talyxian Wolf called Zyn.

However, after the turning point of Zyn's disappearance, her direction and purpose had turned to a dominative and violent attitude, it led to the dictatorship of Shigu Kingdom and even caused World War. During World War, she had become to be known as a very dauntless and brutal soldier.

In the late stages of her life, she had gradually become to own lopsided attachment and strong lust against beautiful Sergal boys, and secretly performed violent and brutal behavior to them. Especially, she willingly aimed at ones who have the Judda form.

Her lopsided attachment was turning to only Sergals, she had shown very low interest in other races such as Nevreans and Agudners. She and the members of the Shigu army who serve her had pillaged many Agudners as technical slaves at World War because they needed Agudners' skillful abilities, however, the victims of Rain's personal brutality were still composed of Sergals mainly.

As one of the noticeable features, she was not able to use or read any written word throughout her entire life because written words are very few in the early stages of Shigu, ones who can use those were really limited to certain members who have a special ability to perform it. In addition, her spoken language was not too fluent in her early stage, due to the primitive and backward situation with regard to communication culture in those times of Northern lands. 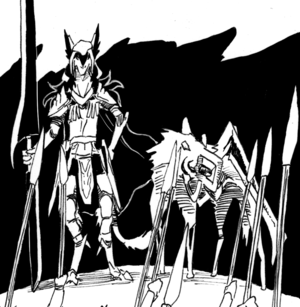 Rain and Zyn the Talyxian Wolf, in the way of journeys across the Northern regions, aiding the poor and guiding them through her leadership. From Vilous Manga Episode 2, Dark Clouds of the Shigu.

She had exceptional strength and the courage to face anything that opposes her. She inspired many Northern people to take up arms and learn how to fight, and to beat back the threatening Talyxian creatures to successfully build roads between villages.

Before long, she had unified extensive regions of Northern Planet Tal, her reign had greatly changed Shigu regions from the previous situations that had been unstable, disjointed, undeveloped for a very long time. After her unity of Northern lands, she had founded the Kingdom that represents Shigu regions, as "Shigu Kingdom."

Her name had become to be known widely to all regions in Tal, as the "Great General Rain". After these a lot of influences and activities, she left her name in Eltus history and record.

After her death, Northern people have felt pity for her abuseful life and begun to consider her as a person who had been caused by the tragedy. Some of the Sergals, mainly Northerners, would even treat and see Rain as a historical heroine. However, as general reception and treatment towards Rain are quite different depending on the region, especially, Southern people do not tend to consider Rain favorably at the same level as that of Northern people.

Neighbors of her village gave much abuse and discrimination to Rain due to her golden eyes by mutation, they had believed her eyes were a bad omen, bad luck, or a curse, eyes of death.

Her mother tried to train Rain stronger, however, it gave a much painful burden to Rain as a result.

She was having a beautiful younger brother. He gave much kindness to Rain. However, he was sickly and had fragile health, he died by illness presumably after Rain fled into the forest with him.

A Talyxian Wolf called Zyn, 'he' functioned like an adoptive father of Rain, during her forest life. Zyn taught Rain how to survive in the forest and how to hunt, however, Zyn did not take any type of communication through language because Talyxian Wolves can not talk. Zyn suddenly disappeared from Rain's side around year 20 of Rain-Calendar.

After she had risen as Great General Rain, she took Jakk, a Sergal, as one of the adopted children under her protection.

There are many children and grandchildren who are under her protection, containing both biological and adopted children. They have an important role in the military and the government at the dynasty in the late stages of Shigu Kingdom. They were having a good treatment on the battlefields as well.

Worthy of note, a lot of her biological children also feature golden or yellow eyes as same as those of Rain.