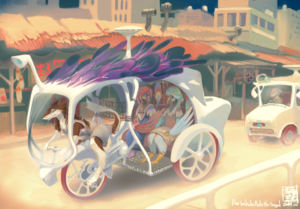 Within Gold Ring, towards the modern era in the year 100 of the Rain Calendar, Kahō Aoki the Southern Sergal, driving a Talyxian power generating tricycle as a taxi driver, while carrying two male Nevrean passengers.

Talyxian Power Generating Rickshaws (タリクシアン動力の人力車) is a kind of common vehicles in the modern era of Gold Ring, which runs while being dependant on human-power as a main driving force. When it heads towards an ascending slope, it invokes the electric Talyxian assist. They are usually driven by Sergals and Agudners as they need physical strength in order to pedal the vehicle that has quite a bit of weight.

These frames are made from the bones of a Talyxian organism which has been passed through breed improvement. When cultivating them, people set vines that the creature then grows into the basic shape in order to form the frame.

In the early stage of the growth, they are covered with a thin meaty membrane. This membrane will wither in the late stage of growth, and a vine will leave only a white and firm stem.

The feather-like things that grow on the roof of the vehicle are known as their leaves which have a power generation ability.

Also, there is a tube that serves in functionality as a power line, reaching all the way down towards the Taxi's actuator parts which contribute to its movement.

These 'power generation leaves' and 'power line tubes' still keep their functionality even after the main body of the creature has withered.

When the vehicle is faced with a situation such as heading towards an ascending slope or being overburdened, the part of it which functions similar to a motor will drive.

Their wheels are made from molded rubbery matter which is extracted from another kind of Talyxian organism.

While there are a lot of kinds of machines that use Talyxian organisms, all of them share a common feature in that their meaty membrane will wither, but still keep bones through growth.

These Talyxian organic machines have been developed through collaborative efforts between Talyxian Rooters and Eltus folks and eventually become available to be distributed amongst the populace.