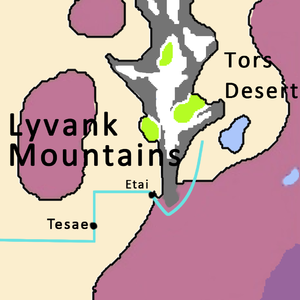 Tesae is one of the biggest cities in Reono. It is there that small caravan carriages and their cargo (carried by man-powered pull-carts) can be transferred to larger, more robust carriages or join up with another trade association in order to form a larger group or conglomerate. It is entrusted to the hands of merchants accustomed to the ways of the Salt Road, with trade bills and crossing the dangerous desert path towards Gold Ring.

There are many merchants in Reono who also serve as members of a trade guild, hailing from each region, be it western or eastern part.  The trading routes and wagons all converge at the city Tesae which serves as the main point of distribution.

The Salt Road is almost the same length as the Lyvank mountains themselves and it takes about 3 months to reach Gold Ring from Tesae. Reono's cargo is centered on living things: food, dyes and wood; and prompt movement is required.  As there are few living things that can approach the desert road, there is little immediate danger from wildlife compared to the forest; however, it is easy to still find yourself in danger. The Sailzane offers a different challenge: strong sunlight and sandstorms. Travelling people join up in a large convoy-styled formation. Special wide wheels and sand-resistant horses are used to ensure that the wagons do not sink in the sand.

When going from Gold Ring back to Reono, the bulk of the cargo is mostly comprised of processed goods such as clothing and accessories, sandstone, salt, and there is little worry about item state. Compared with the way from Reono to Gold Ring, the size of the trading group caravans tend to be small, because relatively slow movement is possible.

How to travel across the Salt Road

Although it is a dangerous desert trip where many people and freights were sacrificed periodically, a lot of ingenuity has been elaborated with the Eltus now taking advantage of that experience. The desert, with lots of salt and few creatures, does harbor one real ecological threat to travelers, known as a "Sand pillow".

A Sand pillow is somewhat thin compared to a conventional pillow, it is an organism of irregular shape and form of a squared quadrilateral body. Their ecology is not well understood, but it is huge anyhow, it is considered to be rolling in a tubular shape and occasionally going through sand and preying upon microorganisms. In doing so, it makes "invisible holes" around the desert area. It is huge, it seems like a huge antlion hell, and once a carriage comes across it, it rapidly becomes a very dangerous situation, swallowing wheels under the sand by sinking them in. Therefore, people concentrate on avoiding this "hell" by any means. It is customary for Sergals to start walking ahead of wagons and fan out the area and check for loose sandy places. Some horses can also help with it, sometimes noticing sand pillows by themselves too.

In order to prevent the damages caused by "sand pillows", a strategy has been employed to space a certain distance on the way of salt and drive a steel pike deeply into the sand. They hate that solid objects like iron pikes can get caught in their body, so they can prevent their intrusion just like caging the sand in the salt road. Because the salt road is so vast, it cannot be paved fully and it is said that although it is not perfect, it is effective.

There is a faction present that helps the harsh journey of the large group going west on the way. They are people belonging to the "Red Gardeners" who stand atop a tower from the Gold Ring region in the desert and observe the ongoing invasion of Magoe. They also play the role of protecting the lighthouse and sheltering the tired people. When they pass by several lighthouses and feel the smell of the tide, they know Gold Ring is near.

The neighboring city of Etai and Road Network 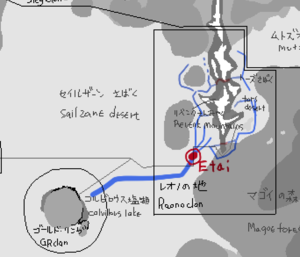 Etai is the neighboring city to Tesae, serving as the defacto chokepoint connector to the extending network of roads branching out throughout Reono and around the Lyvanks.

Reono has been divided into Western and Eastern by the Lyvank Mountains. The western part is relatively calm, with cultivated seeds of high-value green plants as the active harvested resource. However, Western Reono's hunting profits are small. Bakku and Ged, who appear in the comic, lived in West Reono. Because Eastern Reono faces the Magoe region, it is not an exaggeration to say that the revenue of hunting is quite bountiful, supporting the economy of Reono, though the close proximity does invite a greater risk.

The mountain ranges are steep, and it is often difficult to travel up them with a carriage. There are several tunnels on the hilly sides, and until agudners and colleagues constructed them (~100RC ), the only connection between the west and east parts required travel through Magoe.

Etai is also the birthplace of Kadd.