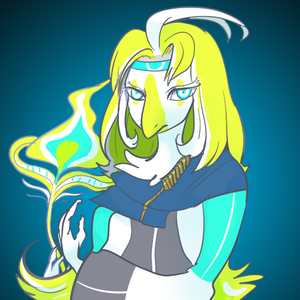 Quu the male nevrean, the official Judda in the late stages of Gold Ring.

Judda (ジュダ Juda) is the name of a general idea or a certain type of form which Eltus have. The basic concept is "A deviated beautiful being, that is regarded as almost sacred, having absolute valuable." Judda is also the title of a public figure in Gold Ring's social structure.

The only Judda character included so far in the currently confirmed canon is Quu, who is a male Nevrean living in the late stages of Gold Ring.

Technically, Judda means the potential nature that is said to hide inside all Eltus beings. Colloquially, it generally refers to a specific person who has a deviant beautiful appearance.

While seen as attractive, Judda is an entirely distinct concept from sexual attraction. "Judda" is absolutely not identical to adjectives that are intended to express sexual charms such as "sexy" or "hot". Instead, it is rather closer to "holy" or "sacred".

To make a metaphor of it, it can be symbolized as "A gold grain which eternally never changes its shape".

Essentially the Judda concept has been inspired by precious and rare Eltus plants that are called "the green plants" among Eltus folks.

The concept and social treatment for Judda differ between the culture of Nevrea and that of Gold Ring.

In Nevrea, Judda is the object of worship and faith, also an important title denoting a serious social role granted to a certain male who embodies the concept.

Meanwhile, in Gold Ring, treatment and common consideration in the concept of Judda are similar to that of idolatry. Legally, Judda is a title in one of the social systems, granted to the individual chosen as the public figure.

The potential and unconscious sense to recognize Judda has a long history and is deeply ingrained as common sense in all races across whole planet Tal. Even in areas where there is no word "Judda", there are similarities in the cultural recognition and treatment toward an individual who exhibits the Judda form.

People who exhibit Judda traits are considered the greatest living treasures in that region, and are treated and valued as such. If someone plunders or injures Judda individuals, it will be treated as a heavy crime.

Even Talyxians, including non-sentient species, may be able to distinguish Judda from others via the same intrinsic sense as possessed by Eltus races. This is especially true of Talyxians which prefer to eat Eltus race people, who evaluate and selectively target Judda persons as a more attractive game than common Eltus people.

Though there may be regional differences, there are common characteristics to some extent in an individual likely to be chosen as a Judda;

Since Judda (the physical form) is tacitly recognized independently of culture, no clear standard for it has been established. The exact shades of colors recognized as Judda vary slightly across regions and civilizations, but generally, golds and greens (like Eltus plants) are acknowledged as "colors of absolutely valuable things", due to the exceptional value and rarity of Tal's green plants.

Male nevreans are said to have co-evolved with the Judda form over generations, concentrating those characteristics and contributing to their appearance. As for the culture in Nevrea, the social position Judda is strictly limited to the most beautiful male in each village. In other regions also, male nevreans are generally easy to be recognized as exhibiting Judda form, except for certain irregular males who have a muted hues more typical of females.

The "Judda system" is present in Gold Ring. The Judda in Gold Ring has an official position and a specific role, and lives in Gold Ring central area where important buildings like government administration centers are generally found. The Judda does not weigh in on government affairs, however, and merely acts as a public symbol of grace and beauty. Most of those who become the Judda are male nevreans, though it is possible for a sergal or agudner to become the Judda if they fulfill all requirements for such a position.

The system of the Judda can be most easily compared to the modern Japanese Emperor system. Like a role what the modern Japanese Emperor works, Judda has no right to governing the people. Judda is instead treated as a public idol, a representative symbol of the Gold Ring nation, and the greatest living treasure of Gold Ring. Additionally, the Judda is not a hereditary position, the title passes to an appointee, not a descendant when the office becomes vacant.

The official Gold Ring Judda in the modern generation is Quu. However, this will most likely be changed in a fixed period of time.

After 40 RC, with the end of the world war, people looked to the Judda concept with more respect and purpose due to the influence of the last Western Sergal survivors. It was meant to serve as a reminder of how tragic war is, and why it should be avoided. However, even then the concept of the Judda does not have a specific purpose, and some hold on to it just for fun.

Thanks to the respect the Judda carries, robbers can't go near the center street of Gold Ring where the nobles and bureaucrats live because such robbers fear the Judda. For various reasons, the Judda is able to hold this much influence even in the modern era.

In Nevrea, a home among Eltus races exclusively to Native Nevreans, Judda is the object of worship and faith, and also a serious social role granted to a male.

Male nevreans have evolved to include the Judda form genetically, and this is reflected in their gender role in their culture, society, and psychological treatment. Due to this, the attitude toward Judda in Nevrea is distinct from that in Gold Ring.

See also: Judda in the culture of Nevrea

It's said to be that many pure Northern Sergals may align with the Judda form. Leeric is a representative example of that, but he often ruins it due to his personality flaws.

General Rain willingly targets sergal boys who align with the Judda form to make them her property due to her lust for beautiful things.