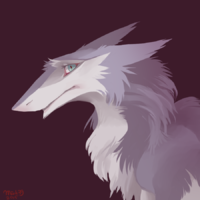 Northern sergals(北方サーガル) remain the most true to the original sergal concepts. Common adult sergals have eyes turning the side, but they keep eyes on front throughout their life. They live in the Northern regions of planet Tal such as the Astna Plains. They are cowardly, deeply religious, and easily influenced. They continue to live their primitive lifestyle to this day. They were the only sentient beings in the North land before General Rain appeared.

Unlike those sergals living in the more developed regions to the South and East, Northern sergals have lived their lives in close proximity to the dangerous primitive beasts of Tal. Their way of life of hunting and religion has changed little over time with many of them following a nomadic lifestyle. A sort of "insanity" has developed among Northern sergals due to their fear of their environment and the creatures that inhabit it. They have nonetheless learned to live with this at least somewhat successfully. 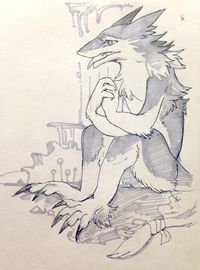 There is little variation in facial appearance between individual Northern sergals, with males and females being outwardly indistinguishable. They wear a permanently wary expression due to their fear of their natural surroundings. Specifically, eyes turn to the front, and ears lie down. As a result, they have a similar appearances of Old Age's sergals.

Their ears are slightly shorter and their fur thicker than their southern cousins. Their fur is thicker around the mane and heels. Their overall physique is larger though they are still not as muscular as the hybrid Eastern sergals.

Their fur colors are cooler shades ranging from black through to gray, blue and purple. The "purest" of Northern sergals have kept their original gray and white color scheme.

Northern sergals have long lived in superstitious awe of their forest surroundings and the dangerous primitive creatures that inhabit them. This reverence has formed the basis for their spirituality and animistic belief system, as well as their hunting and gathering lifestyle.

Individually cowardly, they can nonetheless behave courageously as a group when confronted by a sufficiently terrible threat and guided by suitably fearless individual. They grieve just little when their friend dies by menace of nature. They consider that "It is scary, but there is no help for it. Because it is rule of nature."

Originally their diet would consist of anything they could get their hands on, but has since become almost purely carnivorous. Still, they may still eat certain grasses and insects if prey is scarce. They prefer to eat their prey intact and swallow it whole after it has been stabbed to ensure it is dead. When larger game is killed, they will cut off chunks of a manageable size to swallow whole.

General Rain Silves' Shigu clan occupies a large territory in the northern lands, the only region of planet Tal that could be considered a kingdom or monarchy. General Rain's rise to power brought about a marked change in the Northern sergals' lifestyle, and much of their traditional way of life was lost in the process. 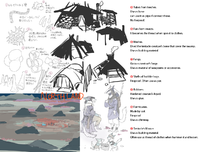 The Northern sergals' natural environment has always played both a maternal and adversarial role. They regard the forests they inhabit with reverence and awe. While they will use the resources of the forest to sustain them, they would never destroy more than is necessary for their survival.

Socially, they will form settlements based around their extended families. They have little in the way of formal laws and use their spiritual connection to the forest as their main source of moral guidance. Individual settlements may be led by an elder or another individual with strong intuition or leadership skills.

Certain individuals may take on leadership roles for their unusual bravery or intuition. Hunting groups may feature a thought-leader whose intuition and deep knowledge of the natural environment is used to make decisions regarding hunting or lifestyle. Meanwhile, a uniquely brave individual may inspire courage in the whole group, and inspire them to act in the face of overwhelming fear such as when encountering primitive creatures.

Their communication is generally confined to cries and some body language due to their more primitive culture. There are some words for spoken language, but those are very simple and primitive. Also there are not any text in their culture. 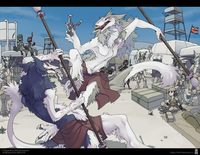 The appearance of Rain Silves and her subsequent rise to dominance led to a major shift in the Northern sergals' lifestyle.

General Rain was able to use the Northern sergals inherent spirituality to her advantage. Those whose faith in the forest was the strongest proved most susceptible to brainwashing, they could be commanded to behave as an almost bestial mob and show great brutality. Rain was able to use her experience growing up in a forest settlement to twist the Northern sergals reverence for the "law of the forest" to her own ends. This ferocity has resulted in General Rain's troop proving insurmountable even for the Eastern sergals of the Reono, despite their individual physical superiority.

Since their domination by Rain, Northern sergals have almost completely abandoned their hunter-gatherer lifestyle and prefer to gather food and resources through the pillaging of rival clans and other acts of oppression. Shigu military technology advanced rapidly as they plundered the resources of their neighbours. Agudner "technology slaves" were captured and forced to perform specialized research for the Shigu.

A part of people may know some text and more words due to slaves who came from East, but most of them still can't use text and civilized spoken language until arrives at modern time.


Why did they change suddenly? 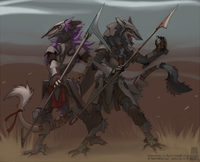 It may be said that the Northern sergals' susceptibility to manipulation and mind control can be attributed to the atmosphere of their forest surroundings.

Some part of Tal' primeval forest have strong miasma. Almost people avoid it, but Northern sergals are exception. Northerns live with such miasmal forest, and eat wildlife from such place. So they live by accept miasma, and are adapted to it. Such miasma of the primordial forest leaving them in a permanent state of hypnosis.

Lacking a strong will of their own, they have adapted to their own near insanity, but this has left them vulnerable to brainwashing by an exceptionally strong willed individual like Rain Silves, behaving like puppets with a new owner.

::Note:: This page needs to be proofread. 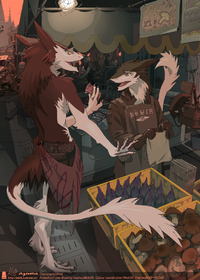 After world-war, a whole of Northern lands will develop and globalize. Then "Shigu Kingdom" will change to "Shigu Dukedom (or Shigu public)". And many Northern people will be able to use civilized spoken language and text.