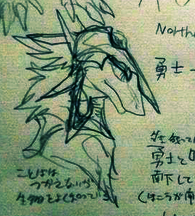 Concept sketch of a Sergal who belongs to Brave clan.

Braves (勇士) are a type of class or clan for Sergals.

It's mainly used for one of the classifications of three types of clan in Shigu in the early stages.

They are a warrior-focused clan, centered on the worship of the mighty and sacred Talyxian Wolves while wearing every object crafted from wolf parts which hold a special spiritual significance.

They worship the Talyxian Wolves as an "incarnation of the forest", modeling aspects of their lifestyle after the T-Wolves' behavior. However, they will sometimes use wolves' corpses for accessories.

They enjoy dressing up like what Rain does, proudly wearing red markings painted on their faces or bodies in the thrill of the hunt. They chase the huge beasts in the wilderness, bravely fighting in groups and proudly knocking down those beasts.

They travel every day with a certain purpose while seeking prey and resources.

They still have little way to use words, but they generally are led by strong intuition or leadership skills with rich knowledge of wildlife. Especially an elder or leader takes on leadership roles for their unusual bravery or intuition.

This clan features a thought-leader whose intuition and deep knowledge of the natural environment are used to make decisions regarding hunting or lifestyle. The head person of them inspire courage in the whole group, and inspire them to act in the face of overwhelming fear such as when encountering horrible wildlife.

Their prey is often a chosen large beast that will provide a challenging fight. They have a deep respect for the forest, which they do not desecrate, for it is the domain of the wolves. These are the type of foods they enjoy eating: