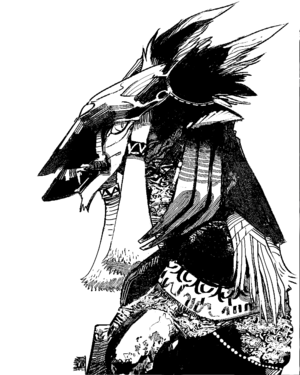 Concept sketch of a sergal who belongs to Shaman clan.

Shamans (呪術師) are a type of class, clan or occupation for Sergals.

It is mainly regarded as one out of the three type of clan classifications In the early Shigu stages, but also used to describe a somewhat common occupation which sergals can pursue.

Shamans are one of the suitable occupations for sergals as well as occupations which make use of their physical abilities like that of combatants and hunters. All sergals are suitable towards working with the surroundings of the supernatural culture, akin to that of shamans due to their deeply religious nature and superior sixth sense. They have a strong ability for shamanism as a racial nature, especially the more primitive sergals such as the uncivilized Northern sergals which were highly predispositioned towards it.

They perform shrine rituals, such as ceremonies, praying for rain, praying for the sun as well as exorcisms. Also, some of them will perform magic rituals, such as incantations, curses, fortunetelling and other miscellaneous praying. They undertake pilgrimages to dozens of small shrines around various places and corners of planet Tal, in order for them to gather up their spiritual powers, which, they believe can make them able to perform both shrine and magic related rituals. Some of these small shrines are also found within dangerous Talyxian biome areas as well. Notably, there is a small shrine within the Magoe Forest where pilgrims undergo a high risk due to much dangerous wildlife presence and so on.

A clan in possession of the "wolf stamp seal" symbolizes their proof of spiritual practice, centering on shamans and mages which can manipulate names via the Art of Naming.

They have a rich knowledge of wildlife and the forest. Also, they show the highest aptitude for fluent speaking and have a higher vocabulary from the three clans in pre-war Shigu. Because handling words is an essential ability for them, they can use some civilized words to some extent. However, due to the few number of words available in the situation of previous Northern lands, even their own ways were still not too fluent.

Comprehensively, they were the most civilized group amongst the Northern sergals before Northern lands became civilized.

They also shared the worship of the Talyxian-Wolves, same as Brave Clans.

They were generally staying in certain areas and rarely traveled from their village or group.

Most of the Northern agudners were often living with their group and shaman sergals were able to trade with them in most of the cases. Thanks to this, they were able to get a hold of comparatively neat clothes and weapons, and their houses and villages were larger than other clans.

While using their biological knowledge and their special technique "The Art of Naming", they can elucidate the true nature of things without falling under miasma's influence.

They use special items like imagoi liquid as a religious tradition, and they will induce a state of unified senses with the Talyxian forest where it is filled with miasma. This behavior is said to allow them to acquire a more mysterious power.

Due to their mysterious, spiritual power and capability, they are believed to be a powerful and dependable member by the people who make allies of shamans. However, if they still do not possess a stamp seal and an unrefined ability to use words, they will always be recognized as "The Wordless" by mature, refined shamans. As such, the wordless will not be considered objectively capable individuals, because of their unstable ability and immature nature may potentially cause unexpected incidents and/or threats, rather than yield good results in their practice.

In prewar times, Northern Shigu lands, the people who can grasp the usage of words well were mostly limited to the ranks of experienced and mature shaman sergals. Even "having one's name" depended on a very special and limited opportunity. A rare occasion, if you will. Due to this, people seldom had names to call each other by, if there was no one around to "Give" them one. It is shamans who undertook this naming or christening process if you will.

Experienced and mature shamans can give names to everything (Individuals, wildlife, various phenomenons) and can elucidate and figure out the true nature of things, without falling under the influence of Miasma.

Thus, "the art of naming" has such an important and spiritual act.

They are excellent in handling danger, entering without fear into a resource-rich forest, and harvesting the meat plants with ease. They live mainly on bringing back seeds, hunting small animals, and domesticating others. This provides a wide variety of food selection: