Thank you very much for your patience. The penultimate guide to Nevrean anatomy is finally available!

Because the original file is simply too large to post on FA, this is a reduced-size version. You can get the original size version on Mick’s Patreon public entry, for free.

As with many other Vilous-related contents, Nevreans also have been updated, improved, and have evolved over time regarding both lore and anatomy. This new reference reflects several minor but noticeable updates.

1. Male Nevreans now have two fingers and one thumb

This is the same as what male Nevreans originally had at first. However, it was once changed to allow three fingers and one thumb to have consistency with the hand structure of female Nevreans. Many official materials began depicting male Nevreans with the three-finger convention.

However, Mick — the lead design creator — had noticed it was really not what she was originally intending for their anatomical design. Due to this, the male hand and finger layout has been reverted back into their original design in this new reference, in order to give the hands a more anatomically plausible wing-like appearance. This makes this the latest and current anatomy version for Nevreans.

As a note: the previous male Nevrean materials with the older hand and finger anatomy design are still available as an older “legacy” version in the Vilous official wiki. If you have a Nevrean character of your own and prefer the “legacy” version style, feel free to remain with the classic style! This change does NOT make your favored style or existing artwork obsolete!

Previous iterations of Nevrean lore showed that they had very little differences as children regardless of gender. Both females and males had gray feathers covering their entire bodies, and had long wings that granted them the ability of limited flight. When they matured and became adults, males got colorful feathers, while the females would have more muted colors and would lose their wings.

However, in the latest version of the lore, the gender differences in children have become a bit more pronounced. They both still begin life with the grayish feathers as young children, but gradually the colors of their feathers shift from gray to their final adult coloration as they grow and mature. The anatomy shape of their feet also helps to distinguish their gender. Like before, Nevrean children of both genders have wings capable of limited flight, but females lose them gradually as they transition into adulthood.

3. Rough pin feathers for aged Nevreans instead of white feathers

The previous lore had indicated that Nevreans get partial white feathers during their elderly years, similar to how humans often get white hair as they age. However, after careful observation of real birds, Mick has noticed this is really not found in nature as real-life birds age, and thus wasn’t very applicable for a bird-based species.

Because of this, in the latest version of lore and design, elder Nevreans now show their age by developing some rough-looking pin feathers, rather than “going gray” with white feathers.

To avoid confusion, we’d like to make this as clear as possible: these design changes were made under the personal direction of Mick herself. Mick decided to implement these changes in order to be more true and pure to her core inspiration and goals for the design of the species in her universe.

If you have questions and opinions about these changes, please take them to Mick directly. She appreciates and welcomes any feedback related to her creation.

You can reach out to Mick via her personal Twitter or reach her on Discord here.

Finally: while earlier we called this the “penultimate” version, we are also preparing the actual ultimate “Deluxe” high-resolution version of the Nevrean anatomy guide, similar to what was offered for Sergals. It will be accompanied with full descriptions that explain the anatomical information on Nevreans, and will also include the adult or “NSFW” anatomy.

We hope you enjoy it. Thank you so much! 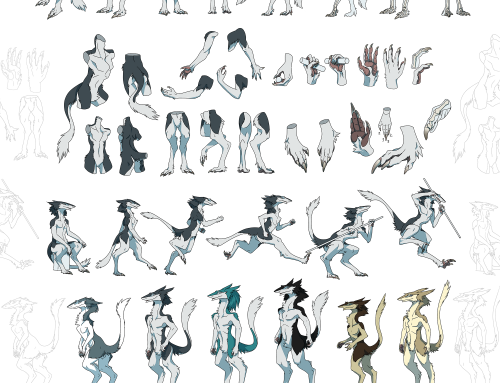