Mick Ono (ミック小野) is an artist from Japan and the original artist and visual designer for Vilous, responsible for visual and biological designs of Sergals, Agudners, Nevreans and all the other races along with many of the world’s most famous characters, including Yung Yagili, Jakk, and The Brutal General, Rain Silves. Her name was known for “Trancy MICK” in old times.

As the creators divide up the worldbuilding of Vilous, Mick focuses on artwork and visual design, while Kiki works on lore and concept. 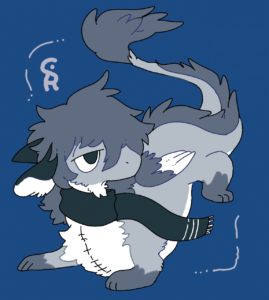 Kiki CRCo-Author
Kiki CR (きき), also known as Kiki-UMA, is an artist from Japan and recognized for Co-Author position within Vilous Universe.

Most if not all of the Vilous lore, canon information and story elements found within the manga comic were created by her. She is currently and actively working on Vilous as the producer and supervisor alongside Mick Ono, the main Visual artist and designer behind Vilous itself.
In addition to this, some of her Vilous ideas crossed over within her own headworld, known as “Tsukurikake”.

Vilous is a fantasy and science fiction world created by the two Japanese artists, Mick Ono and Kiki CR.

It is populated by wondrous creatures and a strange flora, with sentient species of different origin interacting with one another. Its lore has evolved over time, each time with more modern technology.

Information on the world’s canon both new and old is available in the Vilous Wiki. The wiki is in the process of being updated, but for now, why not start with a complete and updated article like Sergals?

The primary organism groups in Vilous are divided into two broad groups: Eltus and Talyxians.

The most well-known species from the Vilous universe, Sergals, belongs to the group of Eltus race. A general outlook upon the scene and biology of Vilous system shows that Planet Tal is considerably different from Earth. Strange plants which do not have chlorophyll occupy most of the planet, demonstrating their unusual characteristics in more reddish and purples tones. There are animals on Tal that are peculiarly different as well from Earth’s animals; although they may share the same name, these are not at all similar to their original namesakes, save by some trait or attribute.

A long time ago, people and creatures called Eltus were living on the planet. One day, an environmental catastrophe advanced to deadly proportions and the “mock living things,” fabricated creatures called Talyxians, came to occupy the whole planet as a new ecosystem, to keep the planet alive. The oceans and many Eltus species creatures drastically decreased. The Eltus people’s bodies changed to resemble animals, and divided from a single human form into three parts: Sergal, Agudner, and Nevrean.

A long time passed. All people of Eltus races still retain a sense of recognizing themselves as human, although as a whole, they are unaware of their original human form, and their original culture. Planet Tal has totally changed into the alien wilderness, covered by Talyxian Biomes. People daily try to save Eltus Biomes to revive their original environment while surviving in the harsh and strange Talyxian environment.

The birth of the irregular person named Rain Silves is a turning point, and the whole of the planet comes to have a new history called Rain Calendar. Throughout a hundred years history on Rain Calendar, Eltus people undergo turbulent changes via the World War that is brought by General Rain. The main original stories are made in the omnibus form for showing the Vilous worldview and history side by side.