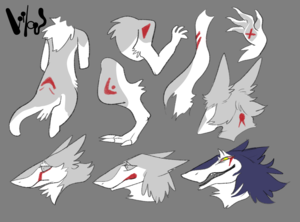 Examples of the traditional red tattoos on Northern Sergals.

The "red tattoo" (赤い刺青), generally called "the Rain's mark" colloquially or "the Wolf's mark" traditionally, is a long-standing traditional culture of the Northern Lands. It is most commonly seen worn or painted around the face region or various body parts.

Traditionally, the tattooing process is done using an extract collected from a Talyxian plant called a “Hifuki”, this is known colloquially amongst the folks as the “fire-breathing grass”.

Whilst this plant does not literally have the capability to breathe fire, it is nicknamed thus, due to the fact that when it’s stem is cut, the plant will release a strong, acidic-like liquid. This liquid can also be technically categorized as a type of Talyxian ink.

People would then take up the freshly cut plant stem and press it firmly against the skin underlying beneath the fur in question that needs to be treated. The skin would start to burn, with the red bruise effects remaining imprinted permanently upon the fur itself, akin to a tattoo. After application, the pain induced is terrible, almost akin to a severe burn. This will also produce a lingering effect on the surface area affected, where the burning sensation will last for months at a time, or even years if the process has been dragged on for a long time. The pain sometimes can be described as if coursing through the entire body. In some traditional areas, folks will repeat the process and press the liquid into the skin several times in order to ensure it will remain imprinted firmly.

These marks and their designs are traditionally limited to “very simple things”. They feature no complicated patterns such as tribal iconographies, or intricate designs, since Northern Sergals have been doing them by hand across time, and their crafting skills were not honed at the early stages without Agudners around to be able to help them out, given that they were very few in between living amongst the Northern lands at the start.

The history of this culture can be roughly split up into 3 eras:

The origin of the tattoo can be found in a custom called "the Wolf's Mark" that was based on faith among Brave Clans in the north. They were inspired by the wild Talyxian Wolves which cut down ominously wriggling, tangled alien trees and brought light to their forests.

Modeled after the Wolves' behavior, this mark was meant to have significance as a right of passage imbued through enduring the suffering and confusion, whilst the act of bleeding red blood would display a marked trait of being Eltus.

The tattoo had also been performed as becoming an adult ritual for warriors who had survived a harsh environment.

It is unconfirmed whether or not Rain Silves was part of a Brave Clan or not, however, she was already known for making use of the traditional tattoos under her eyes when her name first appeared within Eltus history, as the one who was accompanied by Zyn the Talyxian Wolf.

Later on, when Rain unified all of Shigu, the "the Wolf's Mark" became known more as her own symbol alongside her golden eyes, thus the people began to call it "the Rain's Mark", as it had a striking contrast of a red streak under her gold eyes. Many warriors who were or still are respectful and faithful towards Rain, would imprint a marking similar to that on their own bodies.

Even after Rain had left Shigu, her faith would come to remain firm and change the faiths in the entire north while based on traditional Wolf Religion and awe for the forests. Due to the pain incurred by Hifuki Plant's acid usage being so agonizing, modern era folks seem to get by it by substituting it via the use of an imported tattooing technique, developed by Agudners from the southern regions.

However, this became a reason to cement the tattoo as a primary custom of the Shigu folks, not only soldiers. Due to this, in the modern days, various people regardless of the occupation perform this tattoo to express veneration for General Rain. There are some people who imitate the similar style tattoo in other regions too, however, most of them are strictly not based on Shigu's own faith, they just reserve it for one of the options of fashion.

Common hair dyeing and tattoo cultures are presented in various regions throughout Planet Tal. Especially in the eastern and southern lands, there are many tattoo designs available for Agudners and Sergals. Some of which can be complex and inspired by various materials, such as plants, animals, words, and patterns.

Notably, many Sergals take designs that express a story related to life, while Agudners tend to take ones that symbolize elements related to their own occupation. Tattooists, Hair dyers, Carvers for Agudner horns and hooves, dentists are all treated as the same category of occupation.

Also, Talyxian pigmentary inks which have high opacity and are often used for washing hair strongly adhere to Eltus furs and hairs, this can change their fur hues without the need for bleaching.