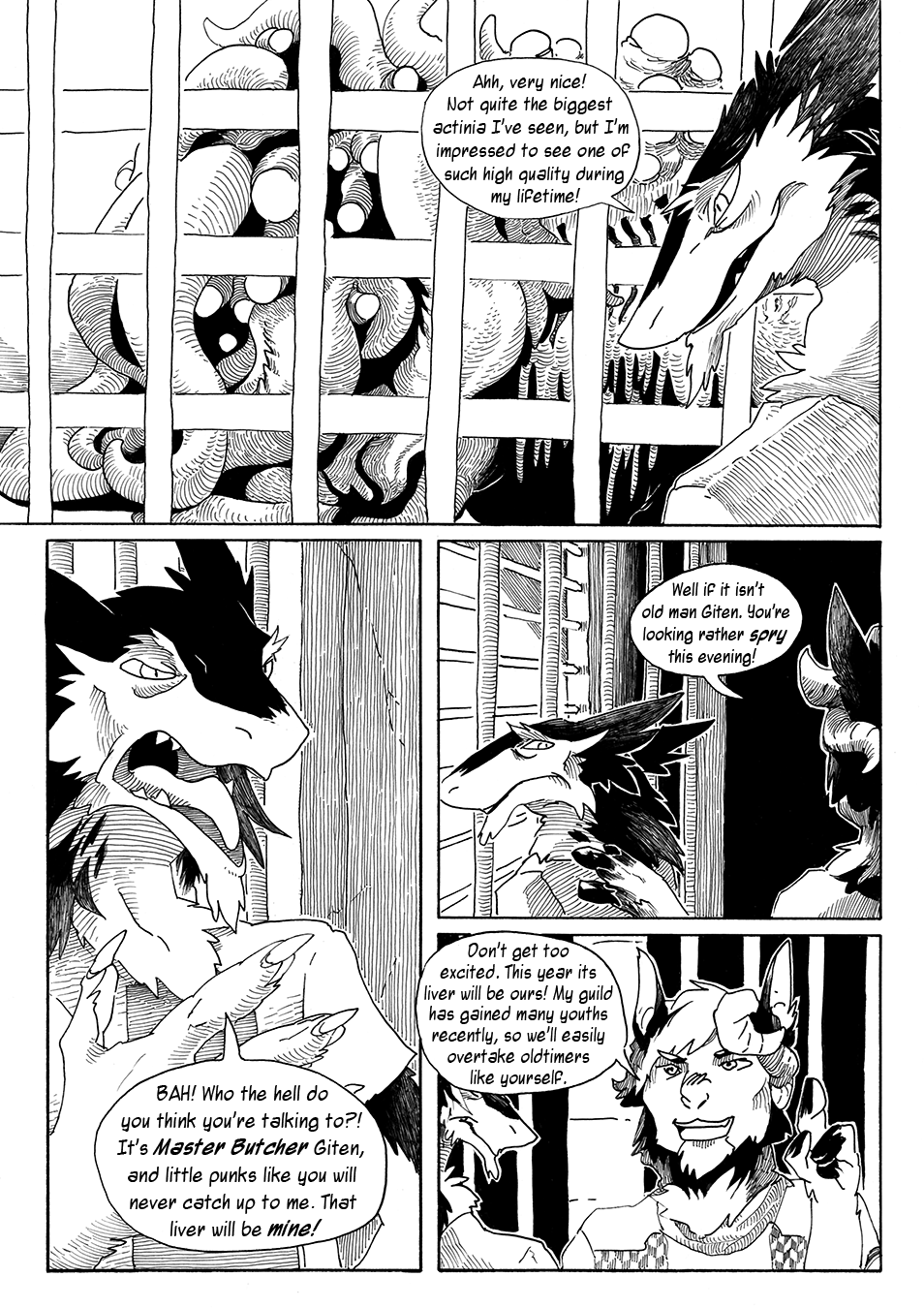 Master Butcher Giten is quite excited after having a moment to inspect the actinia. The caged talyxian beast is both of considerable size and one of the finest specimens the old butcher has ever laid eyes upon. He is already beginning to think about the bountiful variety of meat cuts available for harvest from its body upon being slain, in particular its liver.

However, much to Giten’s chagrin, a new character is introduced: an agudner merchant and business rival of Giten who is also in the meat processing industry! Most of Giten’s business rivals are agudners, and they can process talyxian creatures such as cows and horses efficiently. They have guilds with many active members, who work together to process the meat, skin, and organs for sale.

While Giten also has some assistants of his own, he generally prefers to work on creatures by himself — especially ones that are still alive for the freshest of meat. Giten also has an uncanny ability to determine the quality of ingredients normally unknown to others due to his excellent intuition — a trait common to sergals. Contrasting to this, his agudner merchant rivals focus on industrial advancements to compete in the marketplace. Because of this, they seek out high quality ingredients as well as financial gains as bartering was the main way of trade in this era. In the case of the actinia in question, its liver is the most prized part that the rivals are seeking to claim.

There is a process in place for how merchants vie for acquiring harvesting rights, generally in a bidding system. The bidding is carried out after the end of the gladiatorial show and the talyxian carcasses are removed from the arena. Those who want meat and other extracted materials and organs are allowed to bid using money known as Cevia or items with significant value attached to them in a bartering system.

Each merchant involved in bidding on the creature processing industry attends these arena events, but their real goal is to carefully watch how each creature is slain. They then calculate the general worth of the creature in anticipation for how much to bid after the game in order to maximize profits. For instance, a novice merchant may be gulled into a bidding war and stuck overpaying for a creature with low value due to damaged organs.

Regarding the upcoming battle with the actinia, only the strongest and most skilled fighters will be selected to face off against it. Because actinias are one of the most violent and dangerous of creatures to contest with, a lesser-skilled warrior would be in danger. But just as bad, someone with anything less than combat mastery could damage the prized organs that the butchers are coveting. A miscalculated strike could rupture the prized liver and ruin it, yielding a lower value to the payoff. But who could be so skilled to land a killing blow without damaging these precious commodities? Don’t miss who will accomplish such a difficult feat!