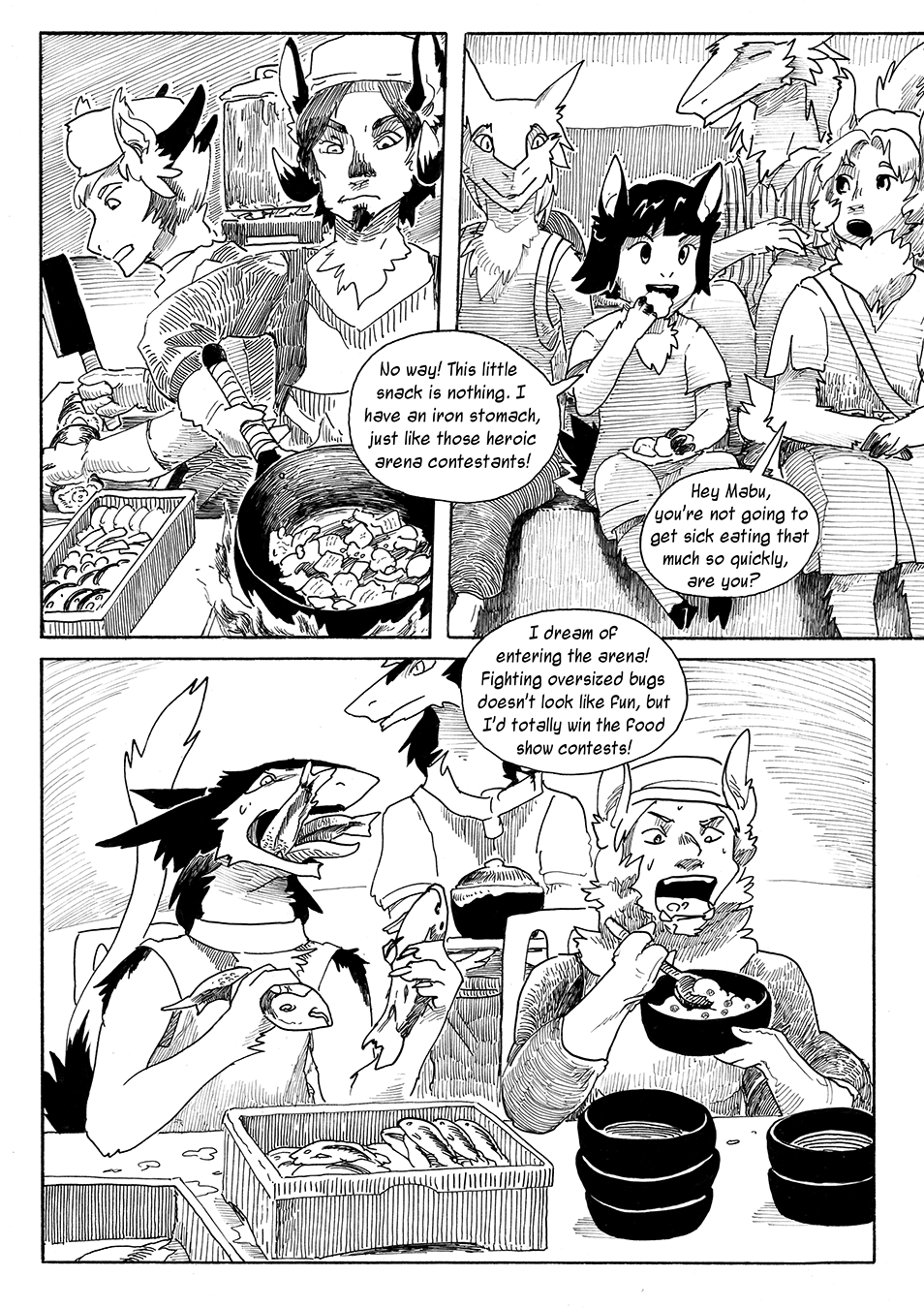 The food show segment of the arena entertainment has begun! While chefs prepare meals with furious intensity, a series of contestants attempt to consume the food with equivalent zeal.

Meanwhile, the young agudner Mabu is inspired by the arena contestants. Even though he is the smallest of the four children, he has eaten more than the others and is showing no sign slowing down! While his reckless behavior is concerning to the kind-hearted Bakku, Mabu laughs it off and boasts that it is nothing to him. He explains that while battling against talyxian wildlife isn’t his thing, as he has no interest to be in a situation that he could be injured. Instead, he dreams of participating in the competitive eating shows to put his iron stomach to work!

About Food Entertainment and Competitive Eating

Food entertainment and competitive eating existed in Gold Ring as a form of public entertainment during the time before General Rain’s war. It had two main elements to it: first, it was a cooking show that chefs could participate in to showcase their craft in both excellence and swiftness. The second part was the “food demolition” aspect where contestants would compete to see who could gobble up the meals as quick as possible. This is similar to real-life hot dog eating contests and Japan’s famous “tuna demolition” shows where a large fish is prepared and eaten in record times.

However, the nature of these shows took a dark twist after word of General Rain and her bizarre and perverted acts — such as swallowing live Eltus children — spread to those in Gold Ring. Some of it was based on truth, while others were exaggerated accounts and rumors. Either way, some became inspired by these tales of Rain Silves and wished to emulate it. This spawned a niche underground culture based around the immoral fetish of swallowing live creatures for the entertainment of others.

Known as “carnivore shows” or “vore shows” for short, these usually involved the swallowing of a live talyxian animal by a sergal for smaller prey or Talyxian creature such as a Stalker for larger prey. However rumors spread of “extreme vore shows” where young Eltus people being devoured as well. Nevreans in particular were targeted to be “vore show” victims for two main reasons. The first is that they are easier to swallow whole due to their smaller size compared to sergals and agudners. Second, before nevreans achieved equal human rights laws around the year 70 RC (Rain Calendar), it was not regarded as highly criminal to abuse nevreans.

While some “extreme vore show” victims may have been later regurgitated off-stage to only give the illusion of perishing or as part of a consentual “daredevil” stunt, not all would have been as lucky. Even those that consented as a stunt faced high risks of permanent injury or death. This lead to the Gold Ring Vigilance Committe performing busts and raids on these underground shows where Eltus peoples were at risk of death.