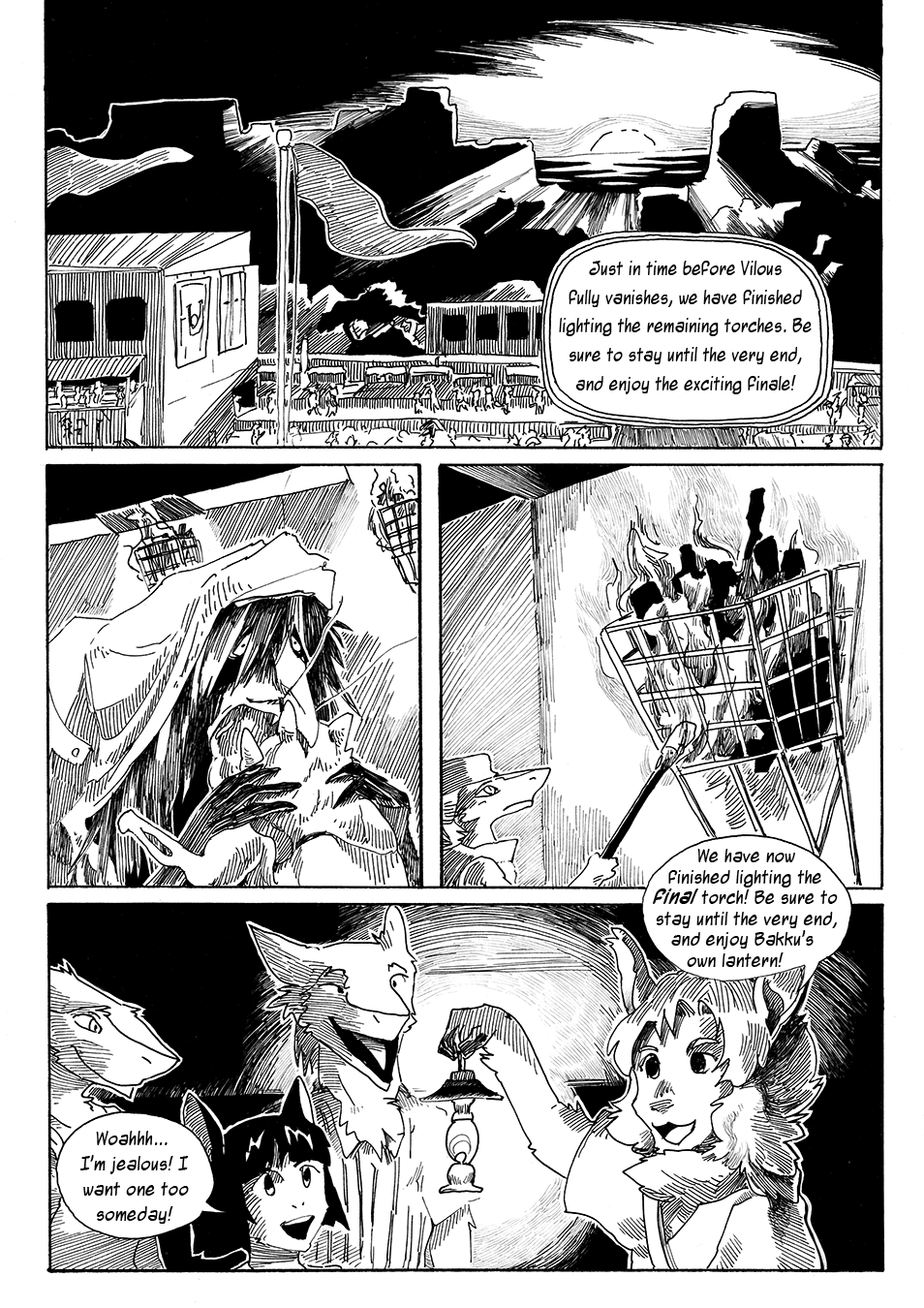 The eating contest and show has reached its final segment, showcasing the spectacle of a talyxian cow being swallowed by an unnamed talyxian stalker. As the eating contest is concluding, the announcer reveals that it is now time for the grand finale of tonight’s entertainment: a fight to the finish against the monstrous actinia!

As the star Vilous descends below the horizon and casts the arena into the darkness of night, the final series of torches are ignited. Thus, the arena is finally set up and ready to continue. Meanwhile, the cheeky Bakku shares his sense of humor and mocks the announcer by lighting a torch of his own. Bakku’s personal lantern is a treasure of his, which his friends openly admire — in particular, Mabu wants one of his very own someday.

Today we’ll be taking a closer look at two of characters featured in this page: Bakku and the Unnamed Talyxian Stalker, starting with the stalker!

The talyxian stalker that is seen gobbling down a talyxian cow is currently only known as the Unknown Talyxian Stalker, or “Unknown Named Talyxian”. He is a male Talyxian-stalker, while his name is not yet revealed, he is referred to by others as generalized names such as “Mister” or “Old fellow”. He has huge body, slender neck, legs, and tail, and has an unusual nevrean-like pointed muzzle. Due to his large body, he sometimes can swallow a cow whole. As one can guess, he made use of his enormous stature by joining the Eating Contest as a food entertainer in the Gold Ring festival. As there is a lot of mystery surrounding him, this is all of the lore on him that is revealed at this time. But keep your eyes open, as this enigmatic Talyxian may appear again in future episodes, where more of his info would be revealed at that time! In the meantime, you can see colored artwork of him on the official Vilous wiki!

Full Name: Bakku Tomaa
Lifetime: Around RC 20 to around RC 80.
Creator: Kiki-UMA
Biography: An agudner boy with long ears and reddish brown fur. He had a slender build in his childhood, but he grew to a rather pudgy build after he matured. He has small two horns on his top of the head with slight differences in length. He also has a third horn on the back part of his head, but due to its small size Bakku’s thick fur hides it from view.

Bakku was born in Reono and lived his childhood up to the age of five, until the Shigu invaded. Accompanied by his uncle, Bakku left his hometown — including his parents and friends. Together they moved to the city of Gold Ring. He was brought up as a merchant, but never had a chance to gain experience as peddler. Even after the end of the World War and Reono began reconstruction from the Shigu invasion, Bakku had not yet decided on whether he might return to Reono or stay in Gold Ring. He was afraid that his family may have died at the hands of General Rain and her Shigu clan, and did not want to return and confirm his fears were true. Then, when he learned that his old friend Ged was still alive, they were able to start a new life in Gold Ring. Starting up a restaurant that served meals using ingredients from Reono was a dream of Ged’s since his childhood, and Bakku was more than eager to help him to accomplish his goal.

Even as a child, Bakku dreamed of being a merchant. The lantern seen above is one of Bakku’s proud treasures and something he had acquired in his pursuit of this dream. He certainly would have a variety of fun items in his possession similar to the lantern! In fact, as seen in the previous episode, “Dark Clouds of the Shigu“, you can see how Bakku already had a talent for being a merchant. He already had his little shop as seen on page 3. Furthermore, page 2 mentioned his unique personality and how he loves his souvenir “festival coin”. These coins were tokens that were crafted and released in limited runs for use at local festivals in Reono where Bakku first acquired it. During these festivals, children get to enjoy many kinds of traditional games at various booths, and are awarded these festival coins upon winning games. Children can then exchange them for snacks and candy, but Bakku loved the coin itself more than any redeemable prize. Even though the coin was just a token with no other real value to it beyond the time of the festival, Bakku loved to collect items like this as much as possible due to his gifted merchant’s soul!

If you would like to learn more about Bakku, as well as his family, you can see more on Kiki’s Patreon update on Bakku! This information is restricted to those that are active patrons to Kiki, but there are many perks! Patrons are awarded early access to many new aspects to the World of Vilous, so please check out Kiki’s Patreon page!