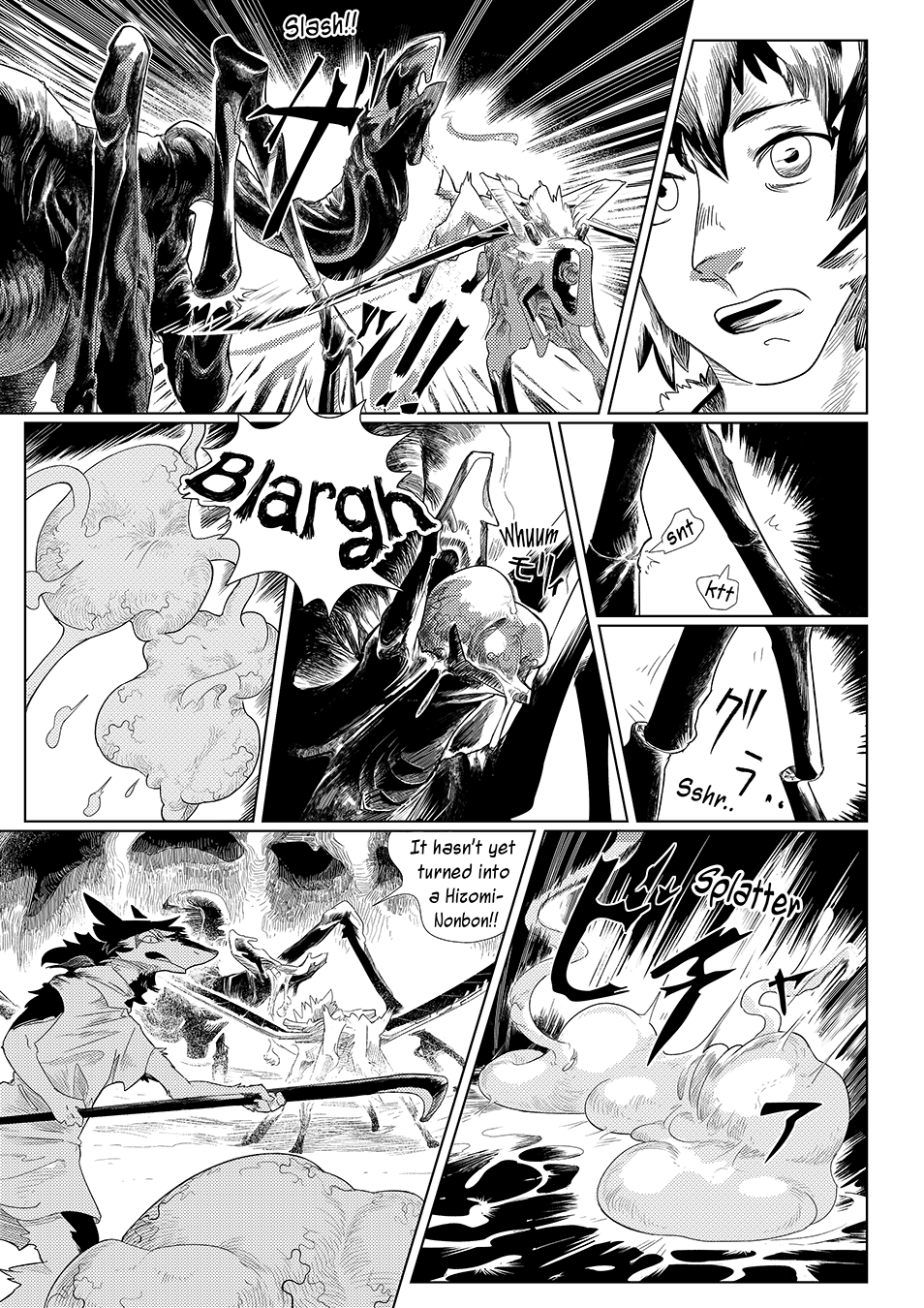 Next comic page is scheduled to release on April 17!

As the reality shift begins, and the area around Ekay begins to light up, the showdown begins back in Base Reality.

Zyn ferociously charges towards the Housepecker. With a swift scissor-like attack, its blades swing, slicing straight through the creature’s limb! The Talyxian Wolf’s blades cut clean through the Housepecker’s leg, sending it toppling down as it breaks off under its weight and causing the Housepecker to lose balance.

The Housepecker writhes in agony, as it lurches its head upwards and begins to vomit up a very large set of conjoined lumps. The grotesque, large sacs fall down to the ground. The Mysterious Sergal uses this chance to slip past the ongoing battle and head towards the sacs. Meanwhile the wolf puts itself between their Sergal companion and the Housepecker, holding its ground in a defensive stance with twin blades at the ready.

The unnamed Sergal remarks that the expelled sacs have not yet had the time to develop into a Hizomi-Nonbon, as they ready up their sharp stave in order to release the inner contents.

Keen-eyed readers will remember that this is not the first time the term “Hizomi-Nonbon” has been appeared within our stories! In Dark Clouds of the Shigu, Page 23 we explain the relationship between Talyxian creatures and their inherent avoidance of salt.

Almost all of the Talyxian organisms avoid salts for unknown reasons. Salt is not inherently toxic to Talyxian creatures, but they have an inherent repulsion towards touching of salt, especially on their mucous membrane areas in their body parts. They will feel intense pain and discomfort if salt is applied, especially to an open wound. For comparison, it is significantly more painful to Talyxians compared to those of the Eltus people.

The Hizomi-Nonbon is a kind of Talyxian excrement, which occurs whenever a Talyxian creature ingests an inordinate amount of salt. This firm, black material forms around the salt contents in order to safely excrete it outside of the organism.

The Mysterious Sergal denotes that the sacs excreted by the Housepecker, have not yet formed into a Hizomi-Nonbon! Whatever the Housepecker ingested, it definitely did not have enough time to digest it, nor did it’s prey seemingly have any salt upon it in order to be safely excreted out.