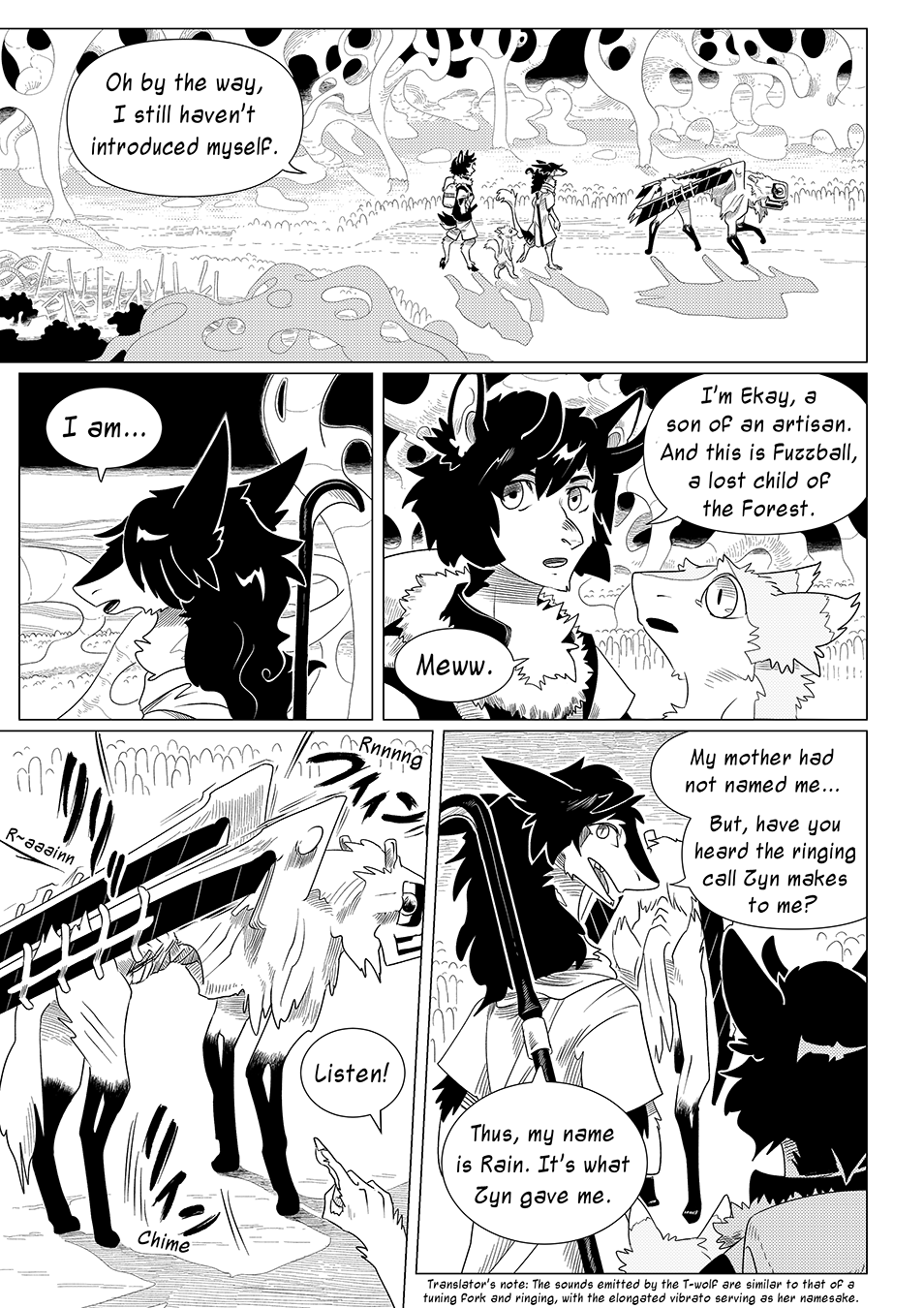 The survivors and their saviors are now making their way through the Forest towards hopeful safety. With Zyn leading the pack, and the rest following suit, our lonesome Agudner remarks towards the unnamed Sergal, that they have not yet introduced themselves. Ekay presents himself as a son of an Artisan, and Fuzzball as a “lost child of the Forest”, suggesting that the Sergal themselves may have been born within the forest itself, rather than in a village or someplace civilized. Fuzzball let’s out a single “Meww” upon hearing his name called out.

Ekay’s words give pause to the unnamed Sergal, stopping them and their Talyxian Wolf Associator briefly. The unnamed Sergal contemplates for a bit, musing to themselves, before turning towards Ekay and revealing that they had not been given a name at birth, however, they present a question.

The unknown Sergal wonders if Ekay has heard their Talyxian Wolf call out to them. She reveals her name’s sake as “Rain“, her reasoning and motif of bearing this name based upon the ringing noise emanated in between the sounds akin to a chime from the Associator when it calls to her.

(Translator’s note: The sounds emitted by the T-wolf are similar to that of a tuning fork and ringing, with the elongated vibrato serving as her namesake.)

Talyxian Wolves make use of their wings in order to produce various sounds. They rub them against one another, similar to how bell crickets in real life do. These emit a series of clear, echoing and beautifully mystic sounds like the examples provided down below can inspire and hopefully help the reader imagine. In addition to the fact that Wolves have been worshipped in the Northern land since ancient times, these types of sounds have given spiritual inspiration and influence to many Northern folks, similar to how Rain Silves obtained her name from Zyn himself.

The Japanese spelling of the name “Rain” is レイン , this is a term closely associated with the elongated vibrato sound that comes straight after the ringing noises as described in the manga. The clear and beautiful sounds can be closely related to that of a wind chime or bell.

When taking into consideration both Japanese and English spellings of their respective onomatopoeias, they both look and sound very similar to one another, as well as in pronunciation. With this page, the origin of Rain’s name has finally been revealed including important facts about Rain. Up first and perhaps even surprising to most, is that Rain was not given a name upon birth. This is consistent with the general naming culture of Sieg folk in the North.

And last, but certainly not least and maybe the most heavy in terms of importance is that, the name of “Rain” is based off and originates from one of Zyn’s noises. The distinct, elongated ringing vibrato sound that echoes out longer than most. One can describe Zyn’s sounds to be similar to that of whirring fan noises, small bells, wind chimes, tuning forks, crickets and so on. Some of these sounds are clear and echoing.

This suggests that the name Rain, can be considered to be bestowed upon her by Zyn, via the nature of inspiration. One may even consider Zyn as the Godfather of Rain herself via this association.